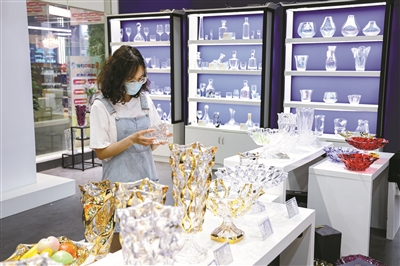 A year has passed since the 2^nd China-CEEC Expo was held. Although this year's 3^rd Expo has to be postponed, Ningbo is still strengthening two-way ties with Central and Eastern European Countries (CEECs) and consolidating the foundation for a new round of deeper cooperation and shared opportunities, living up to its reputation as the "prime destination" for China-CEEC partnership.

Recently, the Central and Eastern European Countries' Products Pavilion at the Ningbo International Conference and Exhibition Center has been witnessing large crowds of shoppers, eager to purchase CEE products with discount coupons issued by the city government.

Among the products, the Hungarian beef gift boxes were particularly popular, each one weighing 7.5kg. Shoppers cleared the shelves in no time.

The pandemic has not severed the close ties between Ningbo and CEECs. The booming business of Ningbo importers proves that there is a vast market for imported CEE goods.

As Ningbo-CEEC ties deepened, late last year, the Ningbo Lianbangchangyun International Trade Company started a new business line of importing beef from Central and Eastern Europe. At present, the company has partnerships with three beef factories in Serbia and Hungary as well as one Hungarian winery. It has imported more than $5 million's worth of goods thus far.

Sun Chonglong, chairman of the company, was grateful for the government's facilitation of the beef's journey from Hungary to Ningbo. The customs clearance process, which usually takes one to three days, was reduced to almost zero, saving time and considerable costs for the company.

"Expanding imports from Central and Eastern Europe is not just a response to China's national initiative—it is necessary for business development and has good market prospects," Sun said.

Despite the postponement of the 3^rd China-CEEC Expo, Ningbo still maintains frequent contact with its CEE friends. Trade cooperation across an entire continent is indeed full of business opportunities, but also contains potential risks. In response to this situation, Ningbo's Central and Eastern European Liaison Officer mechanism, pioneered in 2020, serves a transit point for information exchange and a "lubricant" for two-way communication.

There are eight CEE Liaison Officers whose missions cover all 16 CEECs and nearly ten industrial sectors. They have contacts in many CEECs' trade promotion agencies and diplomatic bodies, and often engage in direct talks with Chinese and European business leaders to facilitate cooperation and friendship. Ningbo also developed the "OLR Working Method", which involves "One-to-One Contact", "List-Based Management" and a "Responsibility System". Together, the Liaison Officers and the "OLR Working Method" have made Ningbo-CEEC partnership even more fruitful.

During the pandemic, the import of ?aciate, Poland's best-known milk brand, into Ningbo was temporarily suspended. In response, the Liaison Officer for Poland immediately began organizing new matchmaking meetings for the brand, eventually securing it a collaboration with China's Jia Jia Le-Mart.

In the run-up to the 2^nd China-CEEC Expo last year, one Liaison Officer attended more than twenty meetings with China's customs officials and wrote seven instructional reports just to help a first-time Czech exhibitor complete the customs clearance procedures and showcase their products at the Expo. For the Liaison Officers, all this work is merely par for the course. Up until now, they have served more than 1,000 foreign companies and responded to queries from more than 7,000 businesses. These impressive figures are proof of the potential and value of the Liaison Officer mechanism.

On June 8^th 2021, the Procurement Alliance of CEEC Commodity was established in Ningbo, the first of its kind in China. At its inauguration ceremony, the Alliance announced the launch of the world's first loans and guarantor services exclusively for China-CEEC trade; a purchase intent agreement of 650 million yuan was signed at the same event.

The Alliance is a bridge between CEECs and the Chinese domestic market. Ningbo is constantly exploring innovative practices in the regulation and promotion of commerce to leverage existing resources, provide better support, and help Chinese and CEE businesses grow.

Since its establishment in June last year, the Alliance has set up overseas warehouses in Poland and Romania, while participating in the development of bonded warehouses and warehouses for general domestic trade. At the same time, it continues to expand imports by bringing together high-quality resources on its network.

To establish a China-CEEC wholesale agricultural market in Poland, the Alliance has taken the lead in designing a series of solutions, including services such as warehousing, distribution, and sourcing for bulk commodities.

"The future of the Alliance lies in broadening new paths for imports by establishing a mutually-beneficial cooperation model with CEE partners," Chen Youxiang, president of the Alliance, said.